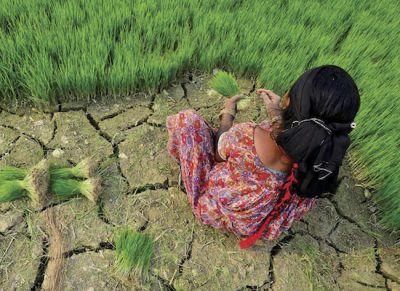 Adapt Now: A Global Call for Leadership on Climate Resilience (2019)

Climate change is one of the greatest threats facing humanity, with far-reaching and devastating impacts on people, the environment, and the economy. Climate impacts affect all regions of the world and cut across all sectors of society. People who did the least to cause the problem—especially those living in poverty and fragile areas—are most at risk.

The costs of climate change on people and the economy are clear. The toll on human life is irrefutable. The question is how will the world respond: Will we delay and pay more or plan ahead and prosper?

Climate change is integrally connected to water systems and resources. Successful adaptation will require scaled-up investments in healthy watersheds and water infrastructure, dramatic improvements in efficiency of water use, and the integration of new climate risks, such as floods and droughts, at every level of planning and operation. More efficient water allocation and use will be vital to economic growth in the face of climate change: without such approaches, the GDPs of India, China and Central Asia would be from 7 to 12 percent lower, and much of Africa would be about 6 percent lower by 2050. Countries that make water management a top national priority, backed up by major governance changes and investments, are more likely to adapt and prosper; those that do not will experience serious challenges.

This report focuses on making the case for climate adaptation, providing specific insights and recommendations in key sectors: food security, the natural environment, water, cities and urban areas, infrastructure, disaster risk management, and finance. It is designed to inspire action among decision-makers, including heads of state and government officials, mayors, business executives, investors, and community leaders.