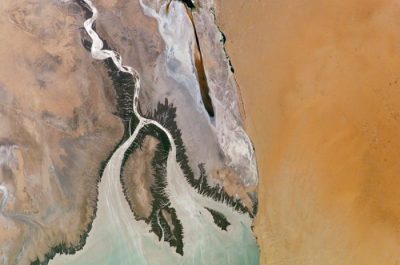 Understanding “Sufficiency” | The Colorado River Delta: Overdrawn and Dried Up (2014)

With the financial support of companies, NGOs were able to do a restoration project and purchase water for a pulse flow in 2014 to revive the Colorado River Delta in Mexico.

Issue:  Lack of sufficient water left to flow through the delta has severely damaged freshwater and estuary ecosystems, disrupted indigenous cultures, and created substantial risks for businesses and farmers.

Figure 6 below graphically summarizes the overall water budget of the Colorado River basin in the western US. This water budget was prepared using a variety of published data sources and a river system model developed by the US Bureau of Reclamation. As illustrated here, it is clear that irrigated agriculture accounts for the largest portion of water withdrawals and consumptive uses in this large river basin (637,000 km2). Another important point about this water budget is that all of the available water is fully consumed before the river reaches its delta in Mexico, in virtually every year. The lack of any ‘reserve’ of water left to flow through the delta has severely damaged freshwater and estuary ecosystems, disrupted indigenous cultures dependent on wild plants and animals for sustenance, and created substantial risks for businesses, farmers, and all other water users during years with less-than-average water availability. There is a strong desire to restore some of the water flow through the delta to support ecosystem, economic, and cultural needs locally. 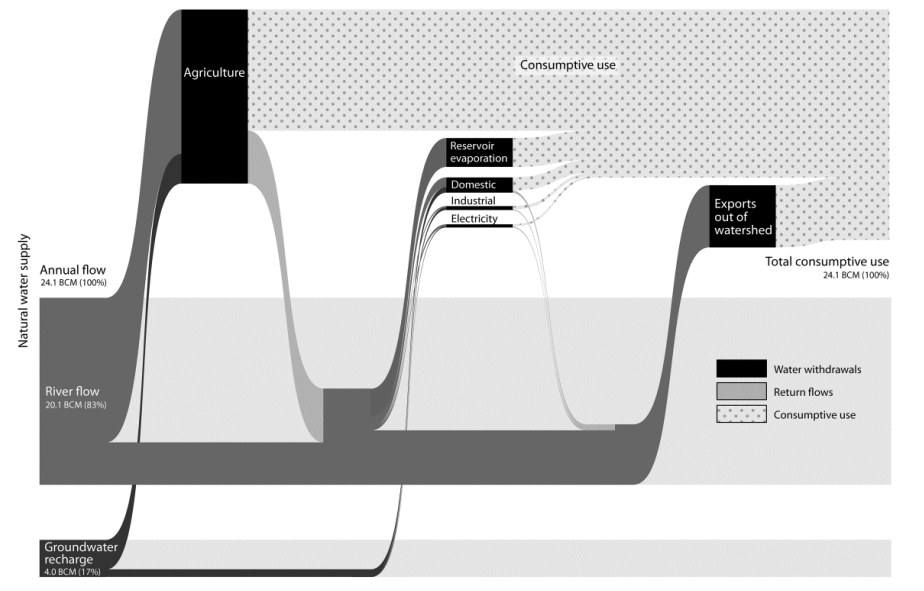 This diagram depicts the natural water supply, use, return flow, and consumptive loss of water in the Colorado River watershed. The far left side of the diagram indicates the average volume of water in the river and in underground aquifers that is renewed by rain and snow annually. This renewable water is withdrawn and used for various purposes, with some portion of the withdrawn water being consumptively used (depleted) and some returning to the river after use. Before reaching the river’s delta in Mexico, all of the water has been consumed.

The water budget portrayed in Figure 6 provides important context for understanding the types of water uses that have led to the ecological, social, and economic impacts experienced today in the Colorado River delta. Prepared at the scale of an entire river basin, such a water budget can also provide insight into regional- or national-scale water policies that may need to be reformed, such as changes in water allocation policies (e.g., “use it or lose it” provisions) at state or federal levels that discourage water conservation in agriculture. Water governance adjustments at state or national scales can be powerful drivers for changes in water use throughout a large river basin such as the Colorado, and can thus be quite influential in mobilizing changes in water use that can help realize the attainment of desired conditions within an entire region. For example, the Commonwealth government in Australia in 2012 adopted a basin-wide plan for the Murray-Darling Basin that mandates a 30% reduction in consumptive use of water across that river basin. Private interests, including associations representing an entire water-sector (e.g., the Farm Bureau often represents the water interests of farmers in the US), can contribute to discussions about needed policy changes.

However, many companies will understandably shy away from playing a highly-visible role in largescale water policy changes, and may prefer to focus on more localized engagement where they can participate in a more tangible way. For example, a number of companies recently contributed financially to an effort to help local communities and NGOs to determine how much water flow would need to be restored to the Colorado River delta to regain some semblance of ecological health. Scientists estimated that unmet water needs for environmental support total approximately 124 million cubic meters per year, on average.

A number of companies also contributed to a monetary fund managed by multiple conservation NGOs (the “Colorado River Delta Water Trust”) for the purpose of purchasing water rights to benefit the delta’s ecosystem. In March 2014, the water rights purchased by the Trust were used to create the first “pulse release” of water from upstream reservoirs into the delta. This pulse release provided water to the delta for the first time in decades. This restoration project has been very well-received by local communities, NGOs, and the farming community, and has garnered considerable publicity and recognition for the companies that helped support the project.