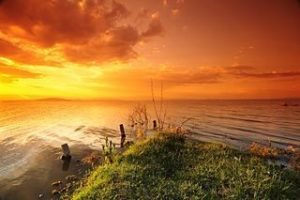 The horticulture industry around Lake Naivasha leverages collective action to reduce their impact on the lake and engage in water stewardship.

The level of engagement by companies can change over time, as the interest and capacity of different parties evolve. This evolution is illustrated in the shifting focus of collective action by the horticulture industry in Lake Naivasha, Kenya, over the past decade.

The cut-flower industry was established around Lake Naivasha in the 1970s, but it was only in the late 1990s that lake levels and water quality challenges became significant as a result of the increasing population, smallholders, and horticulture. Recognizing these challenges, Finlays Horticulture Kenya Ltd. and other private-sector actors and NGOs spearheaded a number of initiatives in the region over the past decade. Given weak government regulatory and management capacity in the catchment, the Lake Naivasha Water Resources Users Association and the Lake Naivasha Growers Group became the focus of engagement between the horticulture companies, water users, and stakeholders with an interest in the lake.

Unfortunately, these initiatives were not always aligned, due to varying interests and uneven capacity. Despite the pressing needs, the participants were not able to derive the full benefits of joint planning and action in mitigating the water challenges in the lake. However, these forums did provide vehicles for collective action around information sharing (including data collection) and consultative engagement (including capacity building and advocacy). This in turn raised the profile of the issues within the government and built the capacity of all role-players.

In 2009, a drought in the region catalyzed engagement of the horticulture industry and other role-players with the government, as the lake dropped to levels last seen in 1941. As a result of the drought and the existing experience with the collective action platform, and with the high-profile involvement of the Prince of Wales’s International Sustainability Institute (among others), the Imarisha Naivasha Initiative was established under the auspices of the prime minister’s office. This initiative is a legal vehicle for coordinating water management initiatives around the lake and in the upstream catchment that is supported by the industry around the lake, in order to support the vision of the Lake Naivasha Basin Integrated Management Plan (facilitated by the Kenya Wildlife Service). Importantly, the management board has only 3 of the 11 seats taken by government officials, while the remaining seats are filled by representatives from the lake, upstream farmers, and other growers around the lake. The ongoing activities of the industry over the past decade facilitated the establishment of the Imarisha Board, which includes the regulatory authorities that have a mandate to ensure effective management of the lake going forward.