South Africa, the 30th driest country in the world, is in the grips of its worst drought in more than 20 years. In parts of the country we have witnessed farmers unable to feed starving cattle, and cities reaching such critical limits around water supply that the taps have simply been switched off. In a recently released ActionAid report, it is reported that in the next 15 years, water demand in South Africa would outstrip supply by 17% and the water boards of the country’s largest cities – Johannesburg, Cape Town, Durban and Pretoria – will likely not have enough water to meet requirements.

Whilst the drought and the future outlook for society and economy at large may be distressing – they do serve to highlight the urgency with which we need businesses like ours, NGO’s, Government and others to act to collectively solve water risks, and reduce the incremental cost to society from poor management of water resources.

Woolworths is in the business of food and clothing, so water is absolutely fundamental to everything we do. You only have to glance at the news to find accounts of rising food and commodity prices, availability issues and concerns around produce quality, all related to the current drought. Managing these risks now and in the future is complicated, not least because of the complex and unpredictable personality of rainfall, but also because of the sheer number of stakeholders and other factors that play a part in both the availability and quality of water.

For Woolworths, the journey towards water stewardship beg 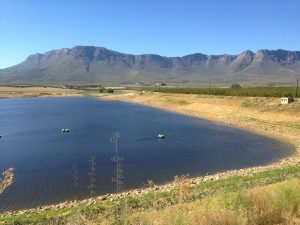 an in 2007. The starting point was to address our own operations, putting measurement systems in place but also maximising opportunities presented to us in the real estate space through increasing the self-sufficiency of our operations. Central, was the development of a real-time monitoring system across all of our stores in South Africa, and the pursuance of a green building strategy to both increase the efficiency of water use but also maximise the use of renewable water resources such as groundwater and rainwater.

Whilst these interventions are important, we realised that our greatest impact and opportunity would be in addressing water quality and supply challenges across our supply chain – in particular in Agriculture – which uses over 60% of all water resources in South Africa and contributes significantly towards water pollution. Through our Farming for the Future programme, started in 2009, we now work with 98% of our primary produce suppliers to help them continuously improve irrigation efficiency, increase soil retention capacity and reduce the volumes of pesticides and fertilisers used.

Whilst these broader level approaches are critical to a business, it’s addressing risks at a local level where we’re now focusing efforts. Using the WWF Water Risk Filter, M&S together with Woolworths identified stone fruit farmers in the Western Cape Province of South Africa as among the most vulnerable to water risk globally. Through our existing partnership with WWF-South Africa, we embarked on a journey of water stewardship with shared fruit farmers in the Breede river catchment to implement and test the Alliance for Water Stewardship Standard. Two years on and the pilot programme has reaped a number of benefits, not least the various on-farm water efficiency improvements adopted by the farmers, but also the identification of shared risk at a broader catchment level. Through the pilot, we have been able to collectively identify the various catchment risks which we’re now helping to alleviate – water thirsty alien vegetation in the catchment headwaters, and localised water quality issues relating to poor management of sanitation in the local community, working with the government Catchment Management Agency.

Ultimately, the water risks we face as a business have also presented us with a significant opportunity – helping our farmers not only save water but become better, more efficient and resilient suppliers. This approach is something that we know we need to replicate and continue to develop using our learnings. Most importantly we have learnt that we can’t solve this problem alone and need to understand where we can partner with other businesses, organisations, research groups government and retailers along the way.

Our commitment to the water stewardship journey will remain even when the drought has temporarily disappeared. Ensuring the long term prosperity of South Africa ultimately hinges upon all key stakeholders, including business, doing their part in a collective manoeuvre to the water crisis we face.

Justin Smith is head of the Woolworths Holdings Good Business Journey (Sustainability Programme) and is responsible for the strategy, structure and integration across the business to deliver its over 200 targets across transformation, social development, environmental issues and climate change.  Woolworths was named International Responsible Retailer of the year in 2008, 2010 and 2012.

Justin was previously head of Governance and Sustainability at the Nedbank Group.

Justin is previous Co-chair of United Nations Environment Programme Finance Initiatives Africa, a member of the National Business Initiative Western Cape Board, a director of the Green Building Council of SA, on the Steering Committee of the UN CEO Water Mandate and a trustee on the Table Mountain Fund.