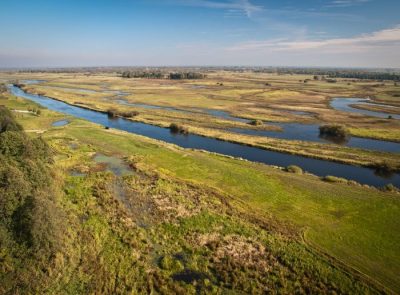 One of the greatest ironies of our time is the fact that we have gained access to information exponentially more voluminous and accurate than available to preceding generations, yet we still lack the collective will to act upon it.

We can’t seem to muster appropriately-responsive actions even when the message is as loud and clear as “you’re about to drive off a cliff.”  Our inabilities to collectively and effectively respond to a warming climate, or to the increasingly-rapid loss of forests, soils, and species, come immediately to mind.

When it comes to water scarcity and the associated plague of water shortages erupting around the globe, we are certainly not lacking in our understanding of the physical roots of the problem.  Thanks to extensive data collection networks around the globe – measuring all relevant aspects of climate, the flows of water in rivers, the storage of water in aquifers or snowpack – we know a great deal about the continuously-renewing availability and distribution of water in our world. Our ability to estimate how much of that renewable supply of water is being removed from water sources for use in cities and industries and on farms has improved greatly in the past decade, as has our computational ability to process, summarize, and map all of that information.

In sum, we have a pretty good picture of the water status of each of the rivers, lakes, and aquifers in our world.  That picture should alarm every one of us.

And it should compel each of us to seriously consider how we as individuals, or as members of influential organizations, corporations, governments, or universities, can help mobilize a collective response.  When we share water resources, we share the dangerous risks of poorly managing them.

At the end of this blog I offer some big questions that need to be addressed if we are going to manage water scarcity more effectively.  But first, an update on what we know about the root causes and extent of scarcity.

The Well Is Dry

My science colleagues and I recently published our latest rendering of the state of water scarcity in the world.  The map below is based upon those findings, generated with the WaterGAP3 global water model developed at the University of Kassel in Germany.  While there are myriad different ways of portraying the state of the world’s water resources, we wanted to paint a picture that would answer the simple question of “where in the world are we running out of water?”

The warm-colored areas on this map identify those water basins where the renewable supply of water is being depleted by more than 75%, meaning that as rain and snowmelt continually replenish these rivers, lakes, or aquifers, more than three-quarters of that resupply is removed and consumed for human uses.

In many of these water basins, the consumptive use of water actually exceeds what is being supplied by rain or snow.  In those places, we are raiding the water savings accounts that have accumulated in aquifers or lakes over hundreds, or thousands, of years.

As with personal bank accounts, it’s important to always maintain a positive balance in the water accounts of rivers, lakes, and aquifers.  In fact, growing scientific evidence suggests that the species richness and proper ecological functioning of freshwater ecosystems may be seriously degraded as we begin to deplete the renewable flows of water by as little as 20%.  As our use of the renewable water supply in any water basin increases, and particularly as it nears 100%, competition and conflict over the remaining supply in that place intensifies, and the risk that some water needs will go unsatisfied escalates, particularly during drier years.

Speaking of bank accounts, the World Economic Forum has now recognized water shortages as being one of the greatest risks to the global economy, with strong links to other impacts such as food crises, profound social instability, large-scale involuntary migration, and the spread of infectious diseases.

As Benjamin Franklin, the renowned American statesman, author, and inventor once put it:

“When the well is dry we know the value of water.”

“Because that’s Where the Water Is”

A newspaper reporter once told a story about the infamous American bank robber named Willie Sutton, who when asked why he robbed banks replied, “Because that’s where the money is.”

Any serious discussion of strategies to reduce water scarcity – whether for the purpose of restoring water flows in depleted freshwater ecosystems or to make more water available for other users – must consider the use of water in irrigated agriculture.  Because that’s where the water is.

Globally, about 85% of all the water removed from rivers, lakes and aquifers and not returned after use goes to irrigated agriculture.  In the water-stressed areas highlighted in the map above, more than 90% of the consumptive use goes to farms.

Irrigated agriculture has been the dominant water user on our planet for a very long time.  The animated time series below (Figure 2) shows the proportion of the renewable water supply that was being consumed for irrigation since the early 1900s, and Figure 3 shows the number of water basins that have been heavily depleted for irrigation use over time.

Because so much of the available water supply has gone to irrigation, cities and industries around the world have found it very difficult and expensive to secure adequate supplies to meet their own needs.  This has very significant implications for employment and economic productivity as well, because studies have shown that when compared to per-unit water use in agriculture, cities and industries will employ 10-100x more people and generate 60-100x more revenue.

This in no way implies that we should not be looking for every way possible to use less water in cities and industries as well.  But only in rare instances will we be able to substantially reduce water-scarcity risks by focusing only on urban and industrial uses.  These facts suggest – quite strongly – that we must find equitable, fair, profitable, and voluntary means of helping farmers to use less water.  If we can find ways for farmers to maintain or increase agricultural production levels using modestly lessened volumes of water – even 10-15% less – we can free up substantial quantities of water for restoring freshwater ecosystems or meeting urban needs.

Any geographically-extensive water-saving initiative in agriculture will require leadership and funding support from governments.  But we all need to help.

For example, in an effort to improve overall water security and restore badly-damaged freshwater ecosystems in the Murray-Darling Basin of Australia, the Commonwealth government has set a goal to reduce consumptive water use by 20%.  To date, more than AUS $13 billion has been appropriated for this purpose, which is being implemented through direct buy-backs of water-use entitlements from farmers as well through investment in on-farm irrigation infrastructure improvements and other water-saving measures.

Any such ambitious endeavors to resolve water scarcity will need to be custom-tailored to the political economies, cultural values, and water-use context of each country, river basin, or aquifer.  Here I will offer some ‘big questions’ that should be addressed in most instances; academic institutions, corporations, NGOs, and governments should all be giving these questions their due consideration and working toward implementing the results.  I invite your reactions or additions to this list.

Are we deploying the most effective water-saving measures in irrigated agriculture in all places, and for all crops, and if not, how can we stimulate full implementation?

Are we growing the right crops, optimized for water productivity and (a changing) climate but also for maximizing economic returns and employment opportunities, and if not, how can we incentivize crop shifting?

Conversely, are there some areas of crop production so essential to food security – at both national and international levels – that we should avoid reallocating water away from those farms?

Do national or even regional imports and exports of agricultural goods make sense from a water perspective, as well as comparative advantage, and if not, what trade incentives or disincentives might drive desired shifts in global trade?

Are agricultural producers able to trade water-use rights in a manner that enables desired shifts in crop production, or financially incentivizes water savings and reallocation (i.e., sale of rights to saved water), and if not, how might water markets be reformed to minimize transaction costs and obstacles to trade?

Is it legally possible to dedicate water savings back to the environment to restore degraded freshwater ecosystems, and if not, what legal reforms are needed?

Brian Richter has been a global leader in water science and conservation for more than 25 years. He is the Chief Scientist for the Water program of The Nature Conservancy, an international conservation organization, where he promotes sustainable water use and management with governments, corporations and local communities. He is also the President of Sustainable Waters, a global water education organization. Brian has consulted on more than 120 water projects worldwide. He serves as a water advisor to some of the world’s largest corporations, investment banks and the United Nations, and has testified before the U.S. Congress on multiple occasions. He also teaches a course on Water Sustainability at the University of Virginia.

Brian has developed numerous scientific tools and methods to support river protection and restoration efforts, including the Indicators of Hydrologic Alteration software that is being used by water managers and scientists worldwide. Brian was featured in a BBC documentary with David Attenborough on “How Many People Can Live on Planet Earth?” He has published many scientific papers on the importance of ecologically sustainable water management in international science journals, and co-authored a book with Sandra Postel entitled Rivers for Life: Managing Water for People and Nature (Island Press, 2003). His new book, Chasing Water: A Guide for Moving from Scarcity to Sustainability, was published by Island Press in June 2014.