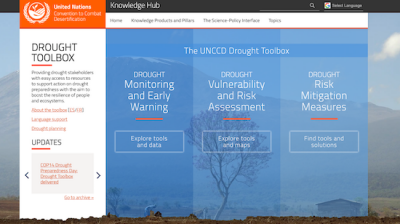 The Drought Toolbox provides drought stakeholders with easy access to tools, case studies, and other resources to support the design of National Drought Policy Plan.

Requested in The COP 13 as part of the Drought Initiative, the toolbox is being designed to provide drought stakeholders with easy access to tools, case studies and other resources to support the design of National Drought Policy Plan with the aim to boost the resilience of people and ecosystems to drought.

The drought toolbox collates a large number of tools organized in 3 modules.

The Drought Toolbox is currently being developed as part of the Drought Initiative through the close partnership among UNCCD, WMO, FAO, GWP, the Joint Research Centre of the European Union, the National Drought Mitigation Center (NDMC) of the University of Nebraska, and UNEP-DHI.

Drought is considered as one of the most far-reaching disasters, causing short and long-term economic and social losses to millions of people.

According to the High-Level Panel on Water (2018), about 40 percent of the world’s population is affected by water scarcity, with as many as 700 million people at risk of being displaced as a result by 2030.

Against this backdrop, the Conference of Parties of the United Nations Convention to Combat Desertification (UNCCD) requested the secretariat and appropriate UNCCD institutions and bodies, including the Science-Policy Interface, within their respective mandate to (a) Implement a drought initiative for the biennium 2018-2019 which proposes action on  drought preparedness systems, regional efforts to reduce drought vulnerability and risk, and a toolbox to boost the resilience of people and ecosystems to drought  (Decision 29/COP13).