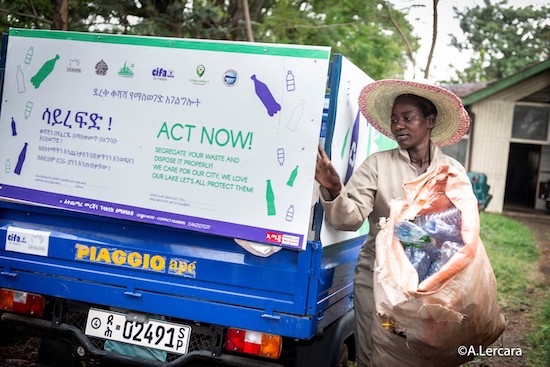 CIFA’s project “100% Plastic – Development of the Collection and Recycling System of Plastic Waste in Hawassa, Ethiopia” was launched on April 2017 to instate plastic recycling and improve waste management in a medium-sized Ethiopian city. Together, CIFA’s local knowledge and IWaSP’s connections to decision makers contributed to the success of the project, which has reduced plastics pollution in Hawassa and reached over 33,000 schoolchildren through an environmental awareness campaign.

CIFA Onlus, an international NGO based in Italy, developed the project to tackle plastic pollution, a problem generated by Ethiopia’s recent economic growth. The project seeks to create a business chain for PET plastics recycling to respond to the global market demand for the material, while also addressing the problem of litter and solid waste dispersion in the environment. Hawassa was chosen because of its beauty and its touristic attractiveness, both jeopardized by plastic pollution. Hawassa is also located just 300 km from Addis Ababa, which has major recycling companies. The Italian Agency for Development Cooperation guaranteed a grant to cover 75% of forecasted costs.

CIFA’s 100% Plastic Project responded to the mission of the PLH platform. Stakeholders and the local government created a bridge between the two projects. CIFA became an active member of the Protecting Lake Hawassa platform, particularly the Solid Waste Project Task Force Team, and the collaboration benefitted both programs.

CIFA gained experience and trust among solid waste collectors and local government officials engaged in solid waste management thanks to a PET business self-sustained chain, which is still operating. The PLH partnership has also installed 297 litter bins within Hawassa to improve the collection and segregation of waste. Collectors receive the PET bottles from the waste producers (citizens as well as public and private institutions) for free or collect them along the street and in the lake. Later, collectors sell the waste to a Solid Waste Association (SWA) running one of the “Recyclable Storage Centers” set up by the Project. This SWA eventually sells the collected plastics to a recycling company in Addis Ababa. The price paid by the recycling company in Addis (around 0.25 euro per kg of PET) allows the SWA to cover the purchasing costs due to primary collectors, the running costs of the collection site, and the transport costs of plastic to Addis Ababa. The system keeps the town clean from plastic bottles without additional burden to the municipality, while generating income for solid waste collectors. CIFA was authorized to promote the business chain through various awareness and communication campaigns.

Just a few months after the Recyclable Storage Centre opened and the awareness campaign started, the Project became popular with the local authorities, as well as with citizens and solid waste collectors. Nevertheless, project staff did not have the capacity to give proper visibility to their actions and to raise awareness of the replicability of the intervention.

GIZ’s IWaSP program took care to connect all the stakeholders involved in the solid waste sector. IWaSP staff had important contacts among policy makers, entrepreneurs, and Hawassa’s leadership. Thanks to IWaSP’s involvement in the 100% Plastic Project, interest in the action spread quickly, enhancing the relationship with stakeholders and increasing the number of involved actors.

As an example, the Hawassa Industrial Park strongly wanted to be part of the Project and started delivering bottle waste to the center. Various civil society organizations and agencies invited us to enrich their environmental awareness activities with the 100% Plastic sensitization program. Thanks to GIZ, UNHABITAT became interested in CIFA’s involvement, making CIFA the sole NGO invited to UNHABITAT’s platform to exchange experiences to design a long-term plan for Hawassa housing, transport, and solid waste management.

IWaSP contributed financial support to environmental awareness activities in schools. IWaSP’s help almost doubled the number of students who participated in the awareness program, which reached over 33,000 children and youths.

After the IWaSP program phased out, CIFA is now collaborating within GIZ’s NatuReS program, with a project aimed to discuss and identify different SWM service provision models.

The collaboration with GIZ gave us the opportunity to present our project at an event in Hamburg discussing good practices on plastic waste management at the municipality level.

Small CSOs often have little opportunity to influence decision makers, even if they are implementing interesting and valuable projects. Similarly, big agencies sometimes lack the opportunity to collaborate with smaller grassroots level actors. The collaboration between GIZ and CIFA not only addressed the large-scale problem of plastic pollution but also bridged the gap between private and public sectors, international agencies and NGOs, and profit and nonprofit institutions, all while involving local communities.

Veolia Submits Communication on Progress for 2019