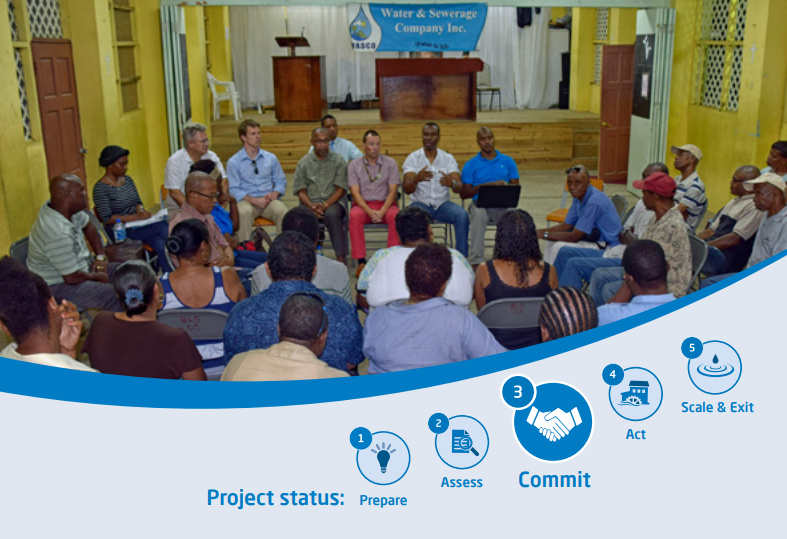 The initial commitment phase in Saint Lucia spanned just over a half a year from the first contacts made in September 2014 to the final project agreement in early 2015.

The initial commitment phase during which GIZ and HEINEKEN presented their individual or particular interests and worked towards a common understanding on water stewardship in Saint Lucia spanned just over a half a year from the first contacts made in September 2014 to the final project agreement in early 2015, during which time formal approval had to be sought from the two GIZ donors, namely the German Federal Ministry for Economic Cooperation and Development (BMZ) and the U.K. Department for International Development (DfID). WASCO’s (the national water utility) commitment was a given from the beginning.

Once all formalities had successfully been taken care of, the three partners engaged in comprehensive stakeholder consultations in the area identified for first action, namely Vieux Fort in southern Saint Lucia. This area was chosen because, first, it is complementary to the “Vieux Fort Water Supply Redevelopment Project” for which GIZ had co-financed the feasibility study along with the ‘Caribbean Development Bank’ (CDB). Second, the Windward and Leeward Brewery Ltd. (HEINEKEN) is located in Vieux Fort.

Looking back on the important lessons learnt during the commitment phase and the factors that yielded final commitment between GIZ-IWaSP and HEINEKEN, clearly, the most crucial precondition for entering into the ‘Saint Lucia Water Stewardship Partnership’ in the first place was the realization of a favorable convergence of partners’ rational self-interests and the fortunate compatibility of social responsibility ethics and values among partners.

In addition, partners shared a conducive and deep-seated understanding that cooperation reduces the risk of individual engagement and unilateral investment.

This website uses cookies to improve your experience while you navigate through the website. Out of these, the cookies that are categorized as necessary are stored on your browser as they are essential for the working of basic functionalities of the website. We also use third-party cookies that help us analyze and understand how you use this website. These cookies will be stored in your browser only with your consent. You also have the option to opt-out of these cookies. But opting out of some of these cookies may affect your browsing experience.
Necessary Always Enabled
Necessary cookies are absolutely essential for the website to function properly. This category only includes cookies that ensures basic functionalities and security features of the website. These cookies do not store any personal information.
Non-necessary
Any cookies that may not be particularly necessary for the website to function and is used specifically to collect user personal data via analytics, ads, other embedded contents are termed as non-necessary cookies. It is mandatory to procure user consent prior to running these cookies on your website.
SAVE & ACCEPT
Translate »